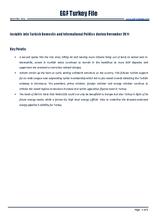 Following the earthquake on October 23, 2011, a second powerful tremor struck eastern Turkey on November 9, killing 40 people including a Japanese rescue worker and two Turkish journalists who were covering the aftermath of the October quake.
The strong quake came on top of a severe cold snap that left much of the province of Van covered in snow, as refugees in the stricken city of Ecris continued to live out of tents