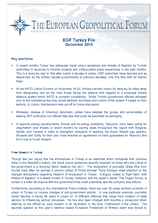 • In recent months Turkey has witnessed harsh prison sentences and threats of litigation by Turkish authorities in response to Kurdish protests and unfavourable press respectively in the past months. This is a worrying sign in that after nearly a decade in power, AKP authorities have become just as reactionary as the military backed governments of previous decades, only this time with an Islamic tinge.

• At the NATO Lisbon Summit on November 19-20, Ankara claimed victory for swaying its allies away from designating Iran as the main threat facing the alliance with regards to a proposed missile defence system which NATO is currently considering. While Turkish government officials indicated prior to the conference that they would demand command and control of the system if based on their territory, in Lisbon, that decision was put off for future discussion.

• Wikileaks' release of American diplomatic cables have detailed the gossip and personalities of leading AKP politicians, but offered little else that could be described as damaging.

• In regional energy developments, Russia and its energy subsidiary, Gazprom, have been opting for pragmatism over threats in recent months by signing deals throughout the region with Bulgaria, Serbia, and Ukraine in order to strengthen prospects of realising the South Stream gas pipeline. Brussels and Sofia, for their part, have reached an agreement on bank guarantees for Nabucco (the EU's rival to South Stream).