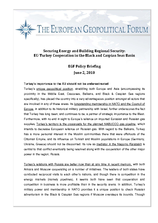 Turkey's importance to the EU should not be underestimated
Turkey's unique geopolitical position, straddling both Europe and Asia (encompassing its proximity in the Middle East, Caucuses, Balkans, and Black & Caspian Sea regions specifically), has placed the country into a very advantageous position amongst all actors that are involved in any of these areas. Its longstanding membership in NATO and the Council of Europe, in addition to its historical military partnership with Israel, further underscores the fact that Turkey has long been, and continues to be, a partner of strategic importance to the West. Furthermore, with no end in sight to Europe's reliance on imported Eurasian and Russian gas supplies, Turkey's territory is the crossroads for the planned NABUCCO gas pipeline, which intends to decrease European reliance on Russian gas.