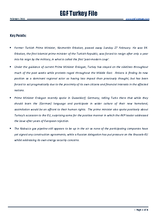 • Former Turkish Prime Minister, Necmettin Erbakan, passed away Sunday 27 February. He was 84. Erbakan, the first Islamist prime minister of the Turkish Republic, was forced to resign after only a year into his reign by the military, in what is called the first "post-modern coup".

• Under the guidance of current Prime Minister Erdogan, Turkey has stayed on the sidelines throughout much of the past weeks while protests raged throughout the Middle East. Ankara is finding its new position as a dominant regional actor as having less impact than previously thought, but has been forced to act pragmatically due to the proximity of its own citizens and financial interests in the affected nations.

• Prime Minister Erdogan recently spoke in Dusseldorf, Germany, telling Turks there that while they should learn the (German) language and participate in wider culture of their new homeland; assimilation would be an affront to their human rights. The prime minister also spoke positively about Turkey's accession to the EU, surprising some for the positive manner in which the AKP leader addressed the issue after years of European rejection.

• The Nabucco gas pipeline still appears to be up in the air as none of the participating companies have yet signed any construction agreements, while a Russian delegation has put pressure on the Brussels-EU whilst addressing its own energy security concerns.