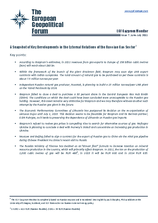 This year, Gazprom is likely to report an income of about $60 billion from the export of 158 bcm of gas to Europe, according to expert estimates. This represents a 12 percent growth in income compared to the previous year and, according to Alexander Medvedev, Deputy Chairman of Gazprom"s Board of Executive Directors, the company"s profits will be close to the record-breaking levels of 2008, when its income from exports reached $65 bn