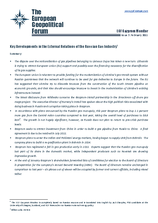 The dispute over the implementation of the EU Third Energy Package in Lithuania continues: the question of Europe"s energy security topped the agenda of the first ever EU energy summit which took place in Brussels on 4 February (2011). The summit began with a speech on the integrated EU energy market and general energy policy towards third countries. Special attention is being given to Russia and the dispute between Gazprom and the Government of Lithuania, which has arisen from plans to nationalise gas transmission pipelines belonging to Lietuvos Dujos.