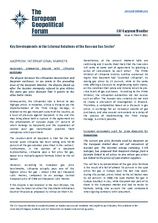 The dispute between the Lithuanian Government and Gazprom continues. As we wrote in the preceding issue of the Gazprom Monitor, the dispute flared up after the Russian monopoly refused to give Vilnius the same gas price discount that it grants to the other Baltic States. Consequently, the Lithuanian side is forced to pay high gas prices. In response, Vilnius is trying to use the implementation of the Third Energy Package, in relation to the gas transport system of the country, as a lever of pressure against Gazprom. In the end this may bring about both a rupture in the agreement on the privatisation of Lietuvos dujos (37 percent of which belongs to Gazprom) and the separation of control over gas transmission pipelines from companies which own them.