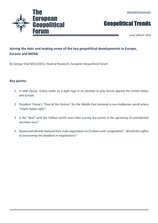 The item is FREE now!

Joining the dots and making sense of the key Geopolitical developments in Europe, Eurasia and MENA

1. In Idlib (Syria), Turkey walks on a tight rope in an attempt to play Russia against the United States and Europe.

2. President Trump"s "Deal of the Century" for the Middle East portends a neo-Hobbesian world where "might makes right".

3. Is the "deal" with the Taliban worth more than scoring few points in the upcoming US presidential elections race?

4. Russia and Ukraine replaced their main negotiators on Donbass with "pragmatists". Would this suffice to overcoming the deadlock in negotiations?