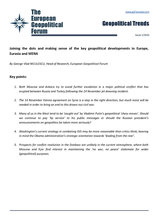 Joining the dots and making sense of the key Geopolitical developments in Europe, Eurasia and MENA

1. Both Moscow and Ankara try to avoid further escalation in a major political conflict that has erupted between Russia and Turkey following the 24 November jet downing incident.

2. The 14 November Vienna agreement on Syria is a step in the right direction, but much more will be needed in order to bring an end to this drawn out civil war.

3. Many of us in the West tend to be "caught out" by Vladimir Putin's geopolitical "chess moves". Should we continue to pay "lip service" to his public messages or should the Russian president's announcements on geopolitics be taken more seriously?

4. Washington"s current strategy in combating ISIS may be more reasonable than critics think, bearing in mind the Obama administration's strategic orientation towards "leading from the rear".

5. Prospects for conflict resolution in the Donbass are unlikely in the current atmosphere, where both Moscow and Kyiv find interest in maintaining the "no war, no peace" stalemate for wider (geopolitical) purposes.